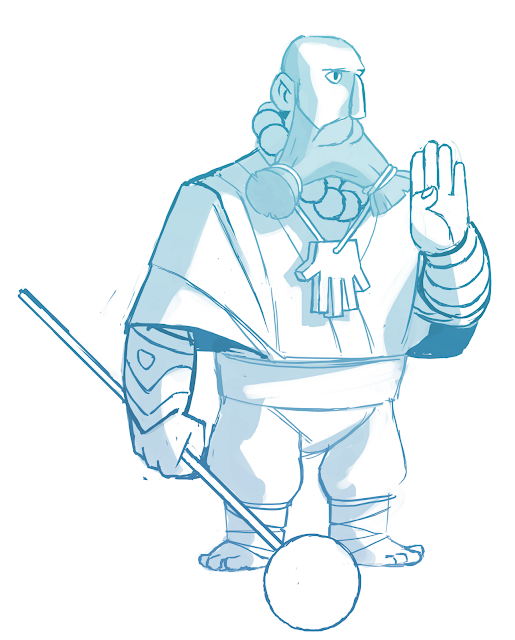 Had a particularly fun D&D game on Saturday. This is Urist, my dwarf cleric/monk. He's starting to get over his natural stoicity and timidity, and has shed his weighty armour to make more use of his honed reflexes in battle. Urist also had to deal with the (pretty gruesome) death of a fellow party member (paralysed and eaten alive by ghouls), which has perhaps had some effect on his outlook - he might now be a little more willing to throw himself into battle in defence of an ally. He has also shaved his head, shortened his beard and stopped eating meat.

I still don't like how conventional maces look, but I can't think of a better way to design it right now so, once again, I've left it as an empty circle. Urist still doesn't hit that hard but he's more capable as a tank, especially after the team fighter, Clarissa, was lamentably coup-de-graced. I fancy drawing the whole team in my style but it'd feel weird, as we're all professional artists of one sort or another and so I'd probably step on a toe somewhere.
Posted by Joe Sparrow at 16:38