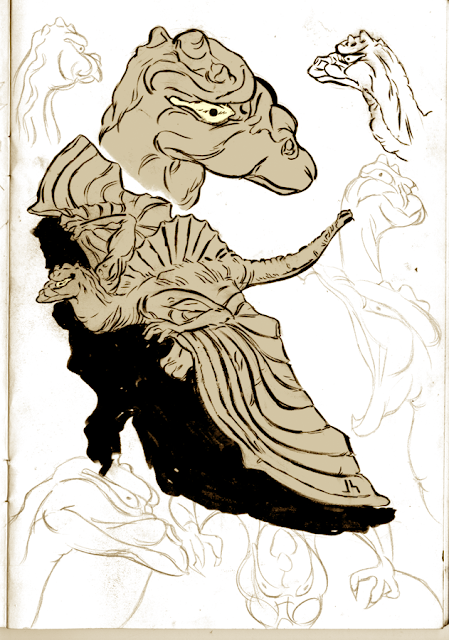 I'm back home now and with my newly imposed "draw stuff from life on actual paper" thing I'm struggling to find interesting stuff to draw. This was recommended by Blanca - it's this weird little dinosaur toy thing she's apparently had since she was a kid, it's made of some rubbery plasticky substance. It's one of those toys where it's obviously drawing on a few sources for its rather loose interperetation of a dragon/dinosaur/whateverthefuckitis. there's something kinda kaiju about it, too, the way the face is bird-like but with those rolls makes me think of something asian. The eyes don't have any depth whatsoever, they're just these little fried egg marks painted on to the plastic (probably by hand, I'd guess).

again, lazy. now that I have a record of what this looks like now I might try and add some actual shading to the body, it's sat by a lamp so the shadows are doably extreme.

edit: come to think of it he reminds me of this guy from that old fleischer superman cartoon!