Today I was reminded that I haven't posted anything here in a while so I figured I'd go ahead and put up some stuff I've wanted to for a while.

I've been going to a free life drawing session on Brick Lane on and off for the past couple of months with my friend Ben. It's super informal, very cramped (it takes place inside this hipster cafe) with no tutorial, just the cold hard problem of sitting in front of a naked person and trying to draw them. The atmosphere is nice, though, and they serve some nice cakes and play fun music. These drawings are roughly chronological, I talk about what I think of people's bodies in there so I guess if the thought of that is unpleasant then don't read the text. 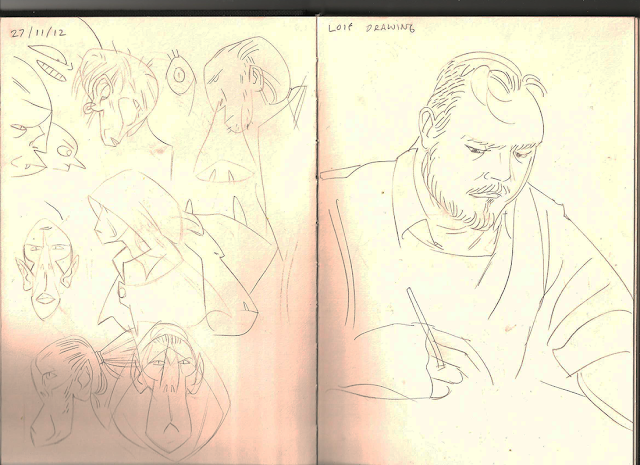 On the right is a quick warmup drawing of Ben before the session starts. On the left are some doodles of a friend's D&D character. There was a girl that we drew this session but my drawings of her are so bad I don't want to post them. 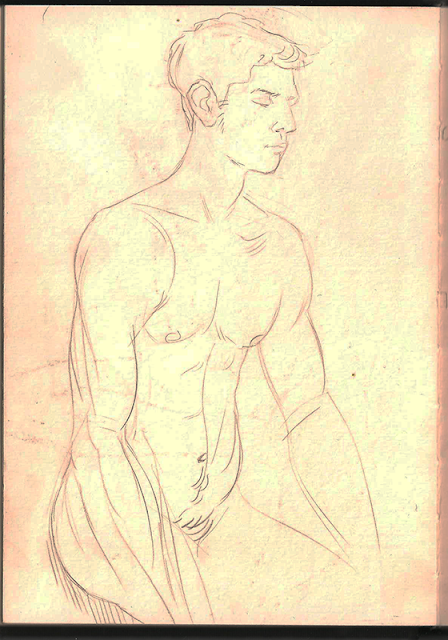 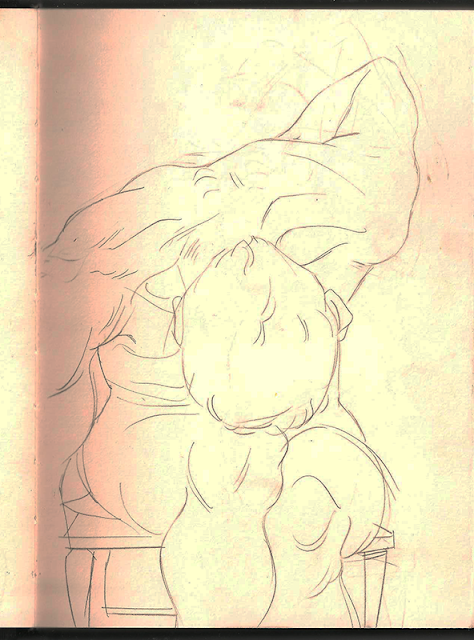 I've seen this guy twice now. He had a look to him that made me think he was a model (like, the photographic kind). He's kind of fun to draw, he's skinny but when he tenses up you can see he has a lot of definition on his torso. 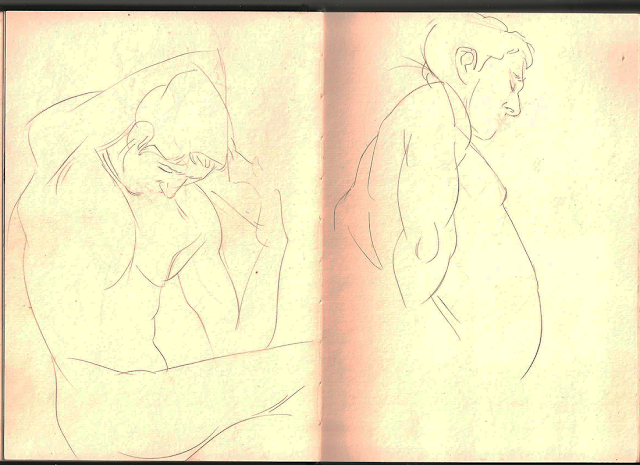 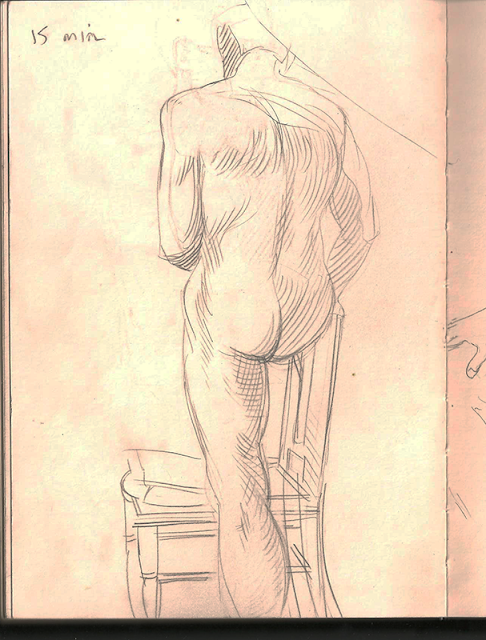 This is another guy. His body was less modelly and he wore glasses which I guess was sort of funny. I was talking to someone and apparently he just does the same 3 poses over and over, which I noticed the next time I saw him. He didn't have a lot of expression in his face, which is something I like with a model. 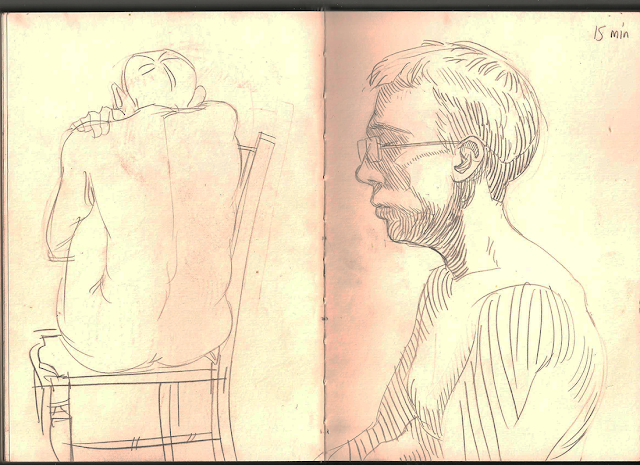 I got told by a lecturer at uni that crosshatching was an illegitimate form of shading. I can sort of see why someone would think that but it was still a stupid thing to say. 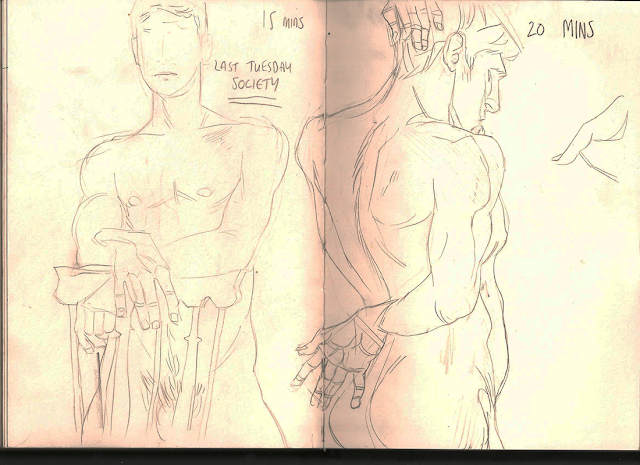 first guy again. These were the only okay drawings I did this session, mostly because I like the way the chair and the hands look. 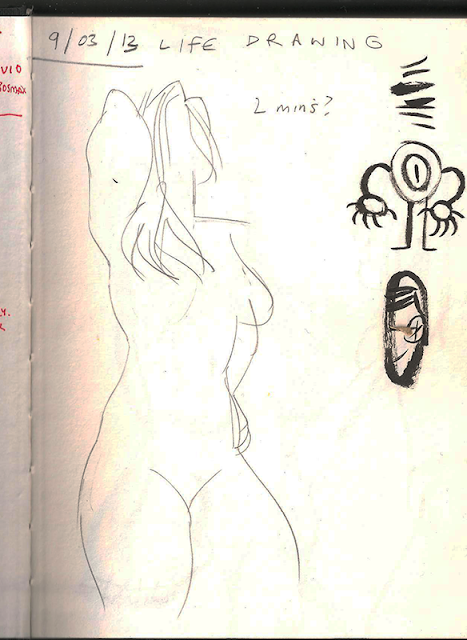 These are from last night. We usually go on tuesdays but broke our pattern and went on the alternate saturday session. Our adventurousness paid off and we drew a new model. I really enjoyed drawing her - one of my big problems is that I'm too up-tight in how I draw and she had a really relaxed, curvy figure which was conducive to me loosening up with the pencil a bit. 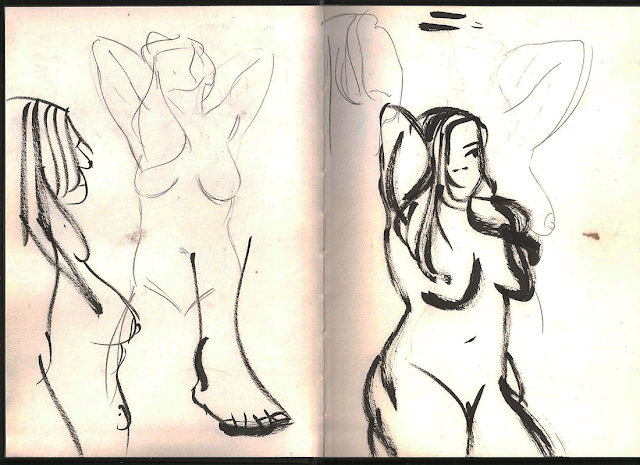 Plus I just need to draw more women in general, I've never ever been good at it. The above drawings were all really quick, like 2 mins or less. They're lazy but I like them because they capture the approximate feel of how she was standing. 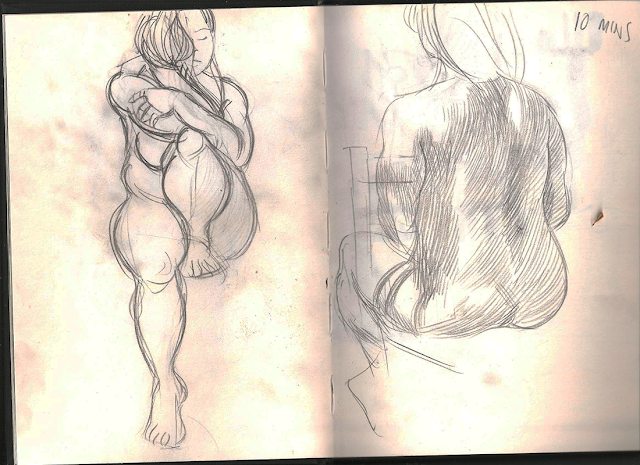 There's a thing that happens with fleshy thighs where if the leg presses against something it sort of spreads out really broad - she had that with a couple of poses, the thigh would just take up like a third of the image. 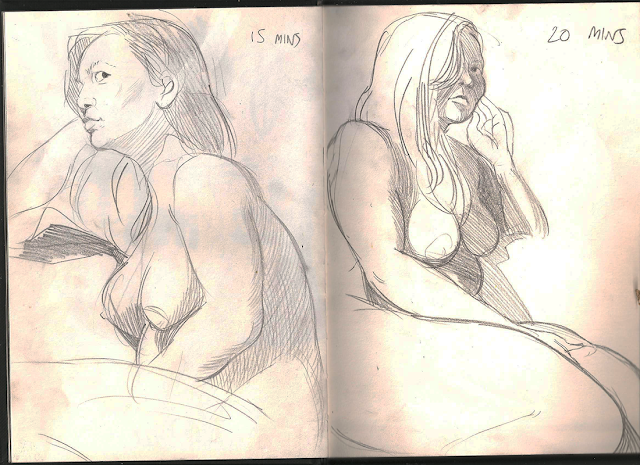 these were the last two I did and I'm pretty happy with them. The pose is captured ok (the hand on the right was a bit rushed) but I got her expression down which is always the best.

anyway, I'll be doing more so I'll either charge up a bunch like this or post them bit by bit.
Posted by Joe Sparrow at 17:34